THE DEMONSTRATION COLLECTION
OF WOODSTONE KUGELBLITZ 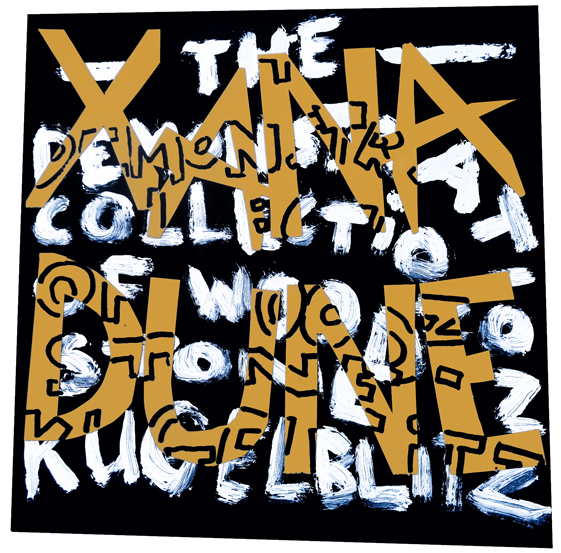 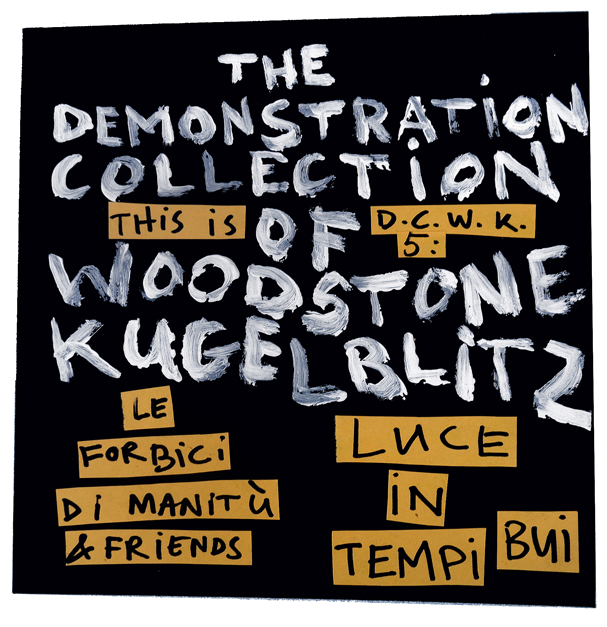 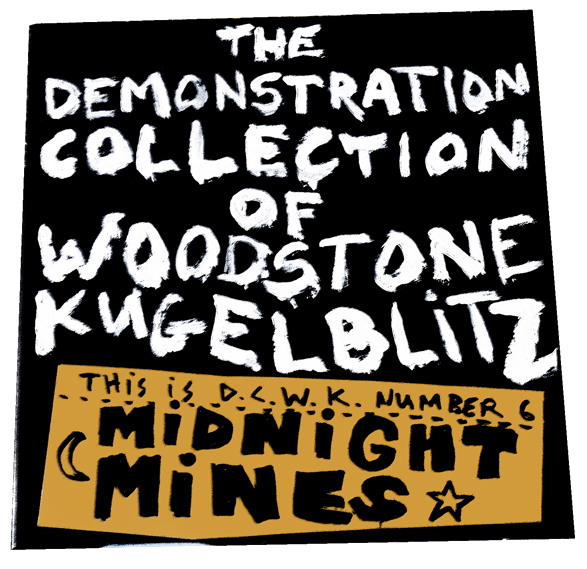 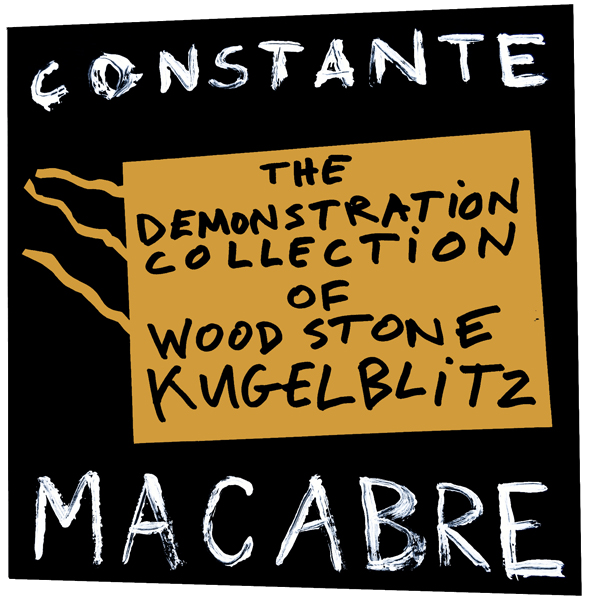 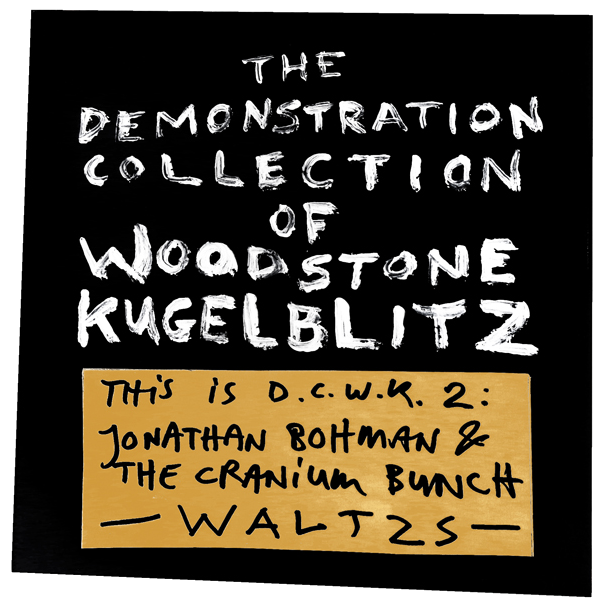 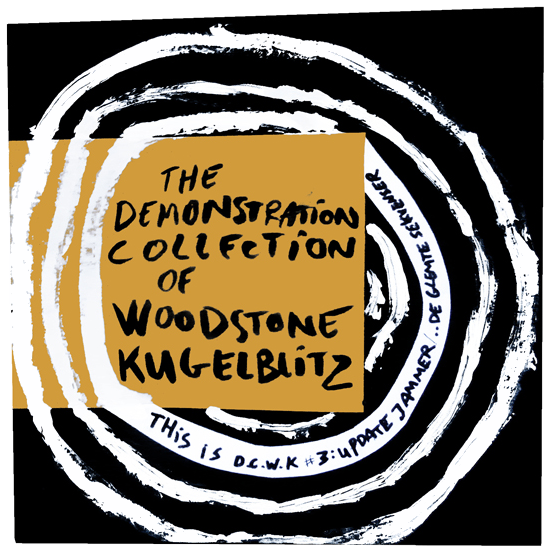 This collection demonstrates the possibility of making records out of woodglue.

The process works quite well for making cheap and dirty records.
It has only one real downside: the woodglue takes a day or two to dry so producing large runs of these records would be rather tedious.
The collection undercuts this problematic by distributing the mould in which records can be poured.

In that way it becomes a DIY-challenge for whoever wants to hear the music. 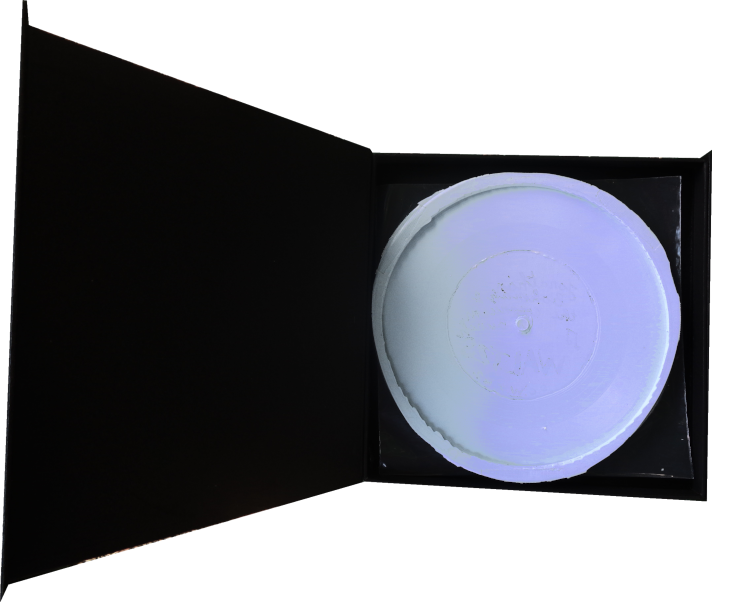 Ever since i was a teenager i made zines about music: it was within my reach - photocopiers - printers - glue and scissors.

There were a couple of zines that used to come with '45 records, Larsen and Multiball for example, i remember sending an email to the Larsen guy, asking how to do that; add a record to a zine.

He replied politely but clearly: forget about it - my sixteen year old pockets were definitely not deep enough.
Now some 17 years later i have developed this reply to my teenage ambition, a distributable-record made in the same ballpark pricing as my first zines (about €50)

WHAT IS A DEMONSTRATION COLLECTION
OR:
A SMALL AND VERY APPROXIMATE HISTORY OF SHARING RECORDS

This story starts in Germany at the beginning of the last century, where in the Phonogramm-Archiv of the Psychological Institute of the University of Berlin Erich Moritz von Hornbostel started arguably the first ever tape-by-mail-trade.
The archive had amassed over the years a large amount of wax-cylinder recordings from all over the world and von Hornbostel proposed to dub you a copy of these cylinders.
The cylinder machines were manual (as opposed to the electric disc-cutters) which made them easy to use all across the world, so the Phonogramm-Archive continued using them until late in the 30’s for recording far-off tribes. 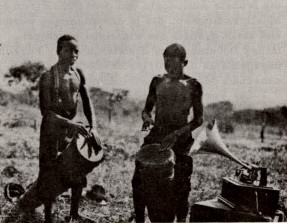 The copying of the fragile cylinders was rather devastating for the wax-grooves – which deteriorated more on each dub. A process was developed to mold and plate the cylinders so as to make more durable ways of copying – but the inventor of this procedure (fatal for the cylinder if done wrong) also proceeded to take his “secret” into the grave with him.
Years later folkways released a compilation of these recordings, made from two different cylinder-dubs.
The recordings are battered, bruised, are played on approximate RPM speeds and sound particularly distant in time and space. They are what they are, and beautiful as such.

The title of these recordings is “The Demonstration Collection of E.M. von Hornbostel”, and listening to the recordings, we can wonder what von Hornbostel is actually demonstrating.
In any case, here I am, 100 years or so later, demonstrating something equally ambivalent. Something useless and great at the same time.

Von Hornbostel’s motive was academic – but also demonstrates ingenuity and a want of sharing something otherwise unavailable.

Equal ingenuity is found a couple decades later in the USSR, where for censorship reasons certain music was unavailable.
This lead to a wide-spread bootleg scene, primarily of literature but also music, called Samizdat (self-published).
Since the practice was clandestine, the makers of this material had to find creative ways to source their raw materials.
For records they discovered that x-rays where great material for cutting music into, and thus bones records came to be, first in the port town of St. Petersburg, and then rapidly spreading across the rest of the territory.
Also called ribs records, these are some beautiful readymades. 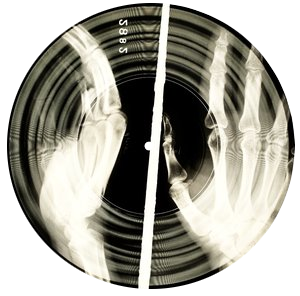 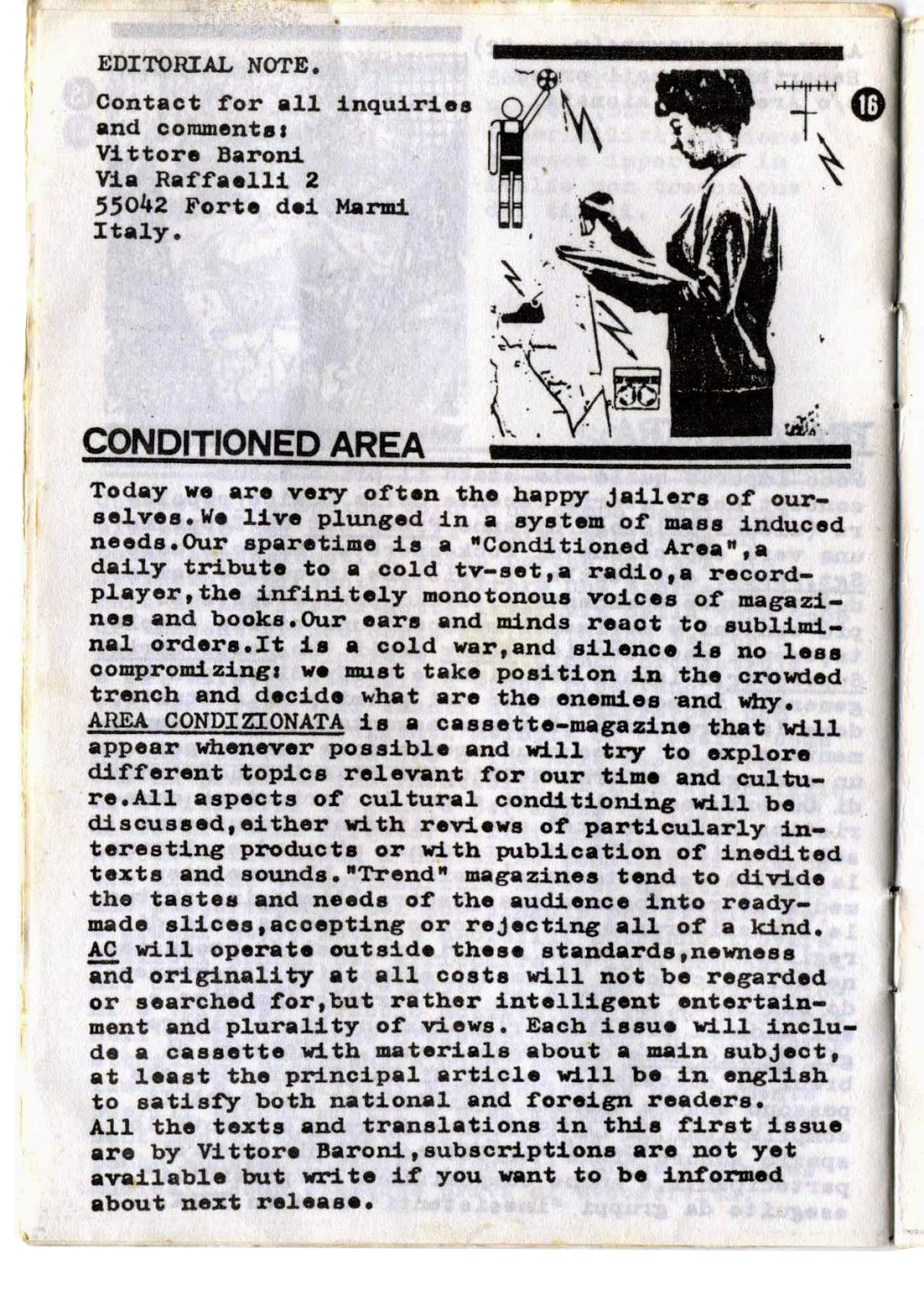 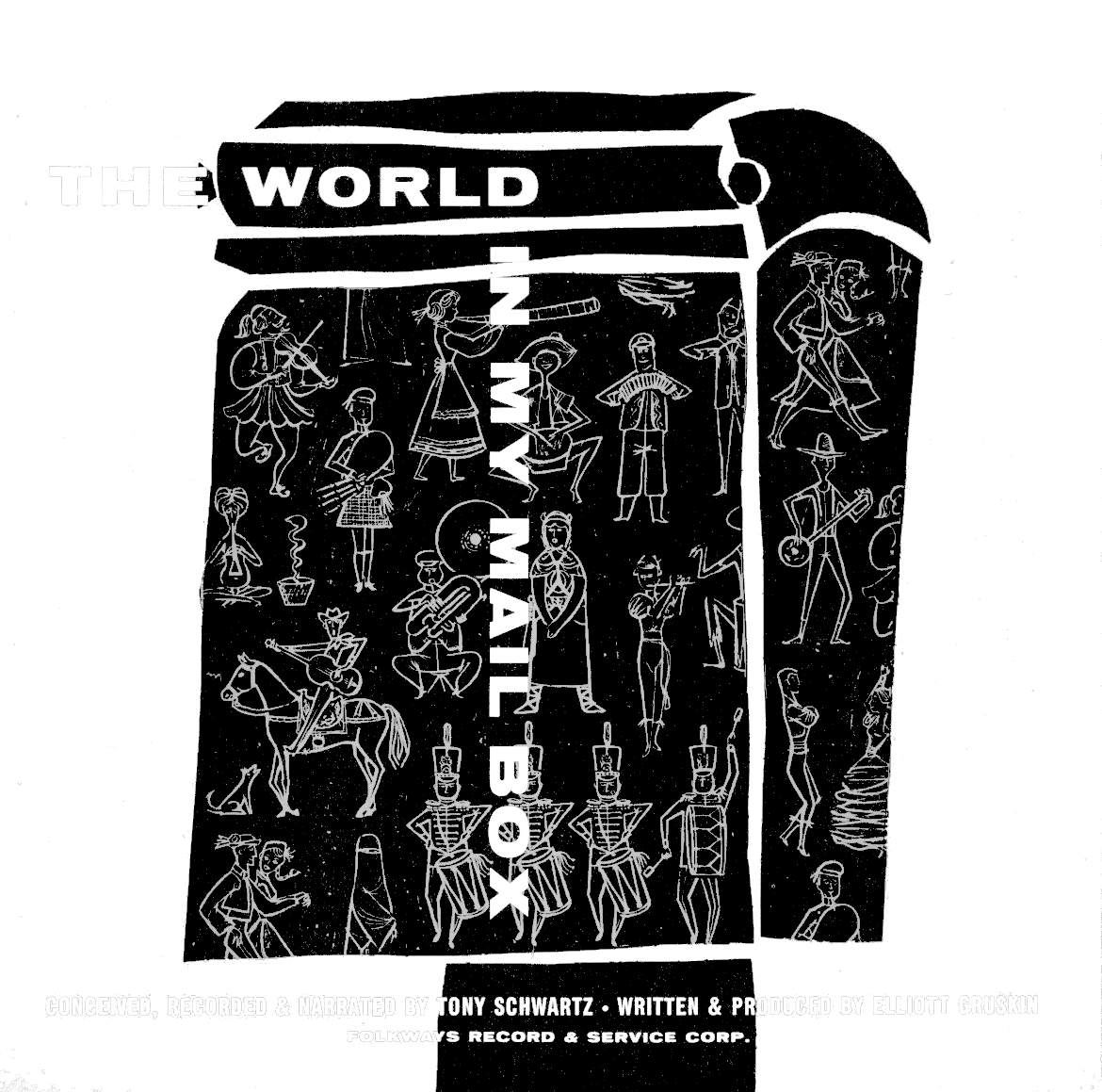 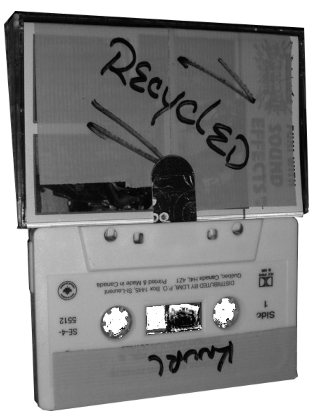 Yet another motive for sharing records is demonstrated by the American ethno-musicologist Tony Schwartz. Usually ethno-musicologists will first travel across a great big ocean or at least state-lines before bothering to press the record button on their equipment but Schwartz could not do this.
He suffered from agoraphobia, which made it virtually impossible for him to travel outside of his own postal-zone.

However, since he lived in New York, he managed to record material large amounts of unique and varied material, pioneering from the 40’s on with tape-recorders and microphones he modified himself to make them portable. Apart from releasing a few great records of documentary and musical material (music in the streets; millions of musicians) he also expanded on his collection of tapes by exchanging music by mail with people from all over the world (documented on his 1958 record “the world in my mailbox”)

With the apparition of cassette tapes there was a further democratization of the reproduction of audio. All projects mentioned above needed complex (cylinder- and lathe-cutters) or rather expensive (reel-to-reel recorders) equipment.
Obviously there was an explosion of releases, too voluminous to treat here, but one practice i would like to pick out is Area Conditizionata: an italian “audio-magazine” made by Vittore Baroni, an artist with a extensive background in mail-art.

In an interview with an Italian fanzine he says the following:
“The early Eighties were an incredibly creative period as regards self-produced and exchanged music on cassette, a movement on a planetary scale that has taken on different names - Cassette Culture and Tape Network the most widespread - and which we can consider a direct filiation of do-it-yourself attitude stemming from punk. A creative effervescence that can very well be compared to other crucial periods in the history of popular music (psychedelia, garage, krautrock, etc.) but which was characterized by a stylistic eclecticism that is difficult to classify, ranging from the most radical noise to recoveries of progressive music, folk, jazz, etc. At that time I received a large amount of cassettes from all over the world, the result of my numerous contacts in the mail art and independent music circuits (I wrote in the monthly Rockerilla and I collaborated on various fanzines, not only Italian). Despite the many editorial activities of the TRAX group / label that involved me from 1981 to 1987 and despite the sound experiments carried out since 1980 under the name Lieutenant Murnau, at that time I received such a quantity of sound proposals and interesting materials, that I found the way to realize this new audio magazine too. Obviously 1983 was a particularly intense and productive year for me and for the Network. (…)
I have always had a passion for home self-productions, since I was a child with paper, pencils, scissors and a stapler I enjoyed creating single-copy comic magazines. The first homemade magazines in which I took part, sheets of poetry, music and various counterculture, date back to the early 1970s. In 1979 I started the mail art magazine Arte Postale! which initially had an almost monthly periodicity. In short, when I came to create Area Conditioning I was well-run and had already acquired all the necessary knowledge to make the most of the "poor" technologies at my disposal, optimizing costs and minimizing waste: low-cost off-sets and copiers in copy shops from my area, still no computer so layouts made strictly by hand with a typewriter, Letraset transfers, scissors and glue, audio montages with plates for audio cassettes and other low-cost technology. For the creation of the tapes, I received by mail the original tracks on cassette from the authors, from them I obtained a high fidelity cassette master by mixing them with a four-track Teac mixer (bought second-hand by my friend Piermario Ciani) connected to three players for audio cassettes. I then took the master to a company for the fast duplication of cassettes, or in the case of small runs, I duplicated directly at home, then affixing stickers on the cassettes and on the 20x20 cm sachets. which contained the magazine. The "assembly line" took place all between my bedroom and the living room, with frequent visits to the post office and copy shops.”

Last stop on this aleatory review of the “children of von hornbostel” is a current project by us noise-label rrrecords (known for their loop-lp’s).
They started a series of noise-tapes called “recycled music” – overdubbing used cassettes and welcoming the residues of the previous music as an integral part of the process.
“The appeals of recycling tape include its environmentally friendly approach and that one often gets "ghost images" of the original recording on the tape. (This not only suits noise music's aleatoric leanings but makes for hilarious moments, as when Clang Quartet's first piece lets out into Cher's "Love on a Rooftop.") And, in a scene where analog tape manipulation is a common instrument of choice, a cassette lends itself to further manipulation by the user. (…)
Cassettes also strengthen the identity of the noise community by separating it from the accepted parameters of the music industry at large. At a time when even the CD seems to be fading into MP3-based oblivion, the widespread resurgence of tapes to distribute noise music differentiates the scene.
"Noise for me is not a listening process. It's a living process," Lessard explains. "Cassettes not only have a soul, they are the only medium that has actual moving parts: the little wheels spin and drag the tape across the head. It's also the only medium that makes its own noise. Take any cassette and shake it; it's like a baby's rattle. Now that's what I call soul."

In the DIY-scene we are all constantly “reinventing the wheel”, but I feel this is often misunderstood as something negative. As a matter of fact the point of this reinvention is not “the wheel” itself, but the shared process, the possibility of distribution through aleatory networks and alternatives to mass production in the physical realm.

Whatever the anterior motives off all the actors in the above text, in the end they found they could only meet their goals by doing it themselves.
I proudly stand in this tradition and hope to add, with the Demonstration Collection of Woodstone Kugelblitz, a stone in the large building of DIY-audio experimenting.

Here are galleries of pictures showing the moulding and copying of the records.
In this project i use silicone from the dutch Poly-service brand (81020) and basic of D2-standard woodglue (avoid fast drying/extra strong etc.-types: get the most basic-one!)
Record labels are scratched in a cheapo "scratch-art" set, they don't photograph very well, but i put some of those labels here

If you want to know more about moulding records check out some of the very instructive videos by Don Wilson.
This thread about my project on the lathe-trolls forum could also be helpfull.

And finally here are some hand-scribbled notes i sent out with the first moulds that were distributed and audio from a glue copy of D.C.W.K #1:

Update Required To play the media you will need to either update your browser to a recent version or update your Flash plugin.